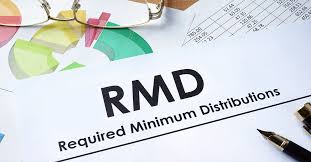 Dear Friends of Our Firm,

Most of us at some time in our life, will have to calculate a required minimum distribution (RMD). Everyone who owns or inherits a traditional IRA must eventually pay the IRS income tax on the distribution. But the rules differ depending on whether you are the original owner, a spouse beneficiary or a nonspouse heir. There is a 50% penalty for taking out too little.

To calculate the RMD, take the account balance on December 31 of the previous tax year and divide by a factor from the IRS table- usually Table III, called the Uniform Lifetime Table in IRS Pub 590. Singles and most marrieds owners use Table III. The exception is an owner with a spouse who is more than 10 years younger and is the IRA’s sole beneficiary. They use Table II, the Joint Life and Last Survivor Table. Generally you don’t have to take out as much money as fast.

A spouse has two options when inheriting an IRA. Roll the money into their own IRA or remain a named beneficiary of the inherited IRA. If the spouse rolls the the account into their own IRA, they must begin taking distribution in the year after they turn 70 1/2 and use Table III.This is the most popular route. A widow who stays a named beneficiary won’t take RMDs’ until the late spouse would have reached 70 1/2. Then the widow would take distribution based on their own life expectancy. The widow would use Table I, which all beneficiaries use.

A nonspouse heir starts RMDs’ the year after the original owner dies and uses Table I. For each subsequent year, the nonspouse heir subtracts one form that factor. Nonspouse heirs who mistakenly take RMDs’ as if they were an owner or a spousal beneficiary will take out too little. They would be assessed in this case the 50% penalty on the shortfall amount.

Contact us at (303) 447-1626 to ensure that you are meeting all the recordkeeping requirements in these areas.
Bill Brooks CPA

Want to join the discussion?
Feel free to contribute!